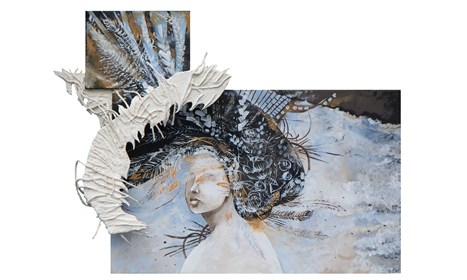 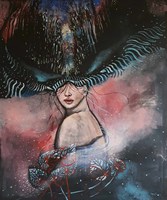 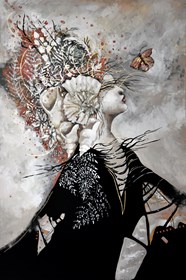 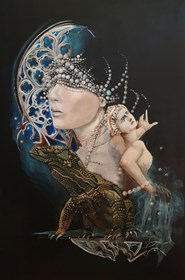 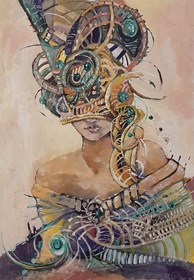 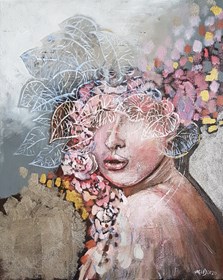 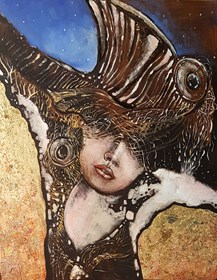 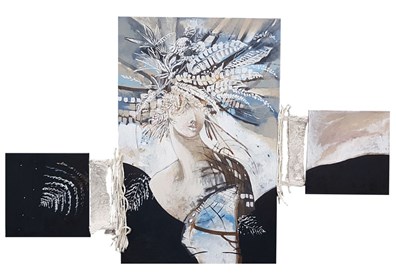 It shows the world of women in a very feminine, veiled and often (seemingly) subdued way. Contemporary women painted by her presented in magical-fantastic, potentially historical references are an emanation
the difficult to overcome history and "genetic memory" of subordination.
Submission is not only a state of coercion but also the fact of resignation from objection. Her women do not accept submission and try to break free from the mental shackles of the past while maintaining their femininity. They're just trying to be effective. Effectiveness in women is not a one-time act proving that... I can also, but a continuous, permanent process of confirming my competences, skills and even ... usefulness which is not the result of parities.

“The dominant theme of her works is women and their condition in the contemporary world. These topics are not communicated directly, so they require intellectual effort and interpretive maturity. The frequently appearing "incomplete" female faces with a certain dose of melancholy, concentration, withdrawal and visible distance to the world, and even those with undisguised attributes of agency provoke reflection, intriguing by asking questions about the limits of subordination or ... independence. It is a search for one's own identity by annexing space in social identity. The problems faced by the statistically larger part of our population are often of a mental nature, which, since the dawn of our species, has left a mark on social roles and dependencies. Despite many changes and the passage of time, the social role of women for a large part of society has not changed significantly.
As for the workshop layer, the very subdued colors used by the painter, rarely tolerating a wider range of colors, and the frequent use of various shades of black and gray, give her works a very specific, original atmosphere full of interpretation nuances. Forcing often to intellectual searches, and sometimes even when communing with them again, to reinterpret previously developed opinions. The presented characters are abstracted from the context of the surrounding background, the lack of or minimization of which does not mean its irrelevance, but it definitely hierarchizes the themes or characters presented. So the background is an area of ??a certain nothingness. Depending on the adopted interpretation path, the background may be an area of ??irrelevance, and therefore not worth attention, or, on the contrary, an area of ??nothingness, an abyss in which the main subject can at any moment plunge into nothingness. Although this procedure was used by many painters, here it is applied in a clean and uncompromising manner (of course, excluding previous works). Depth, nothingness, non-space, elusiveness can bring us closer to understanding through contrast and emphasis, or absorb everything irretrievably. A female poetics without trying to sexualize, sometimes with the promise of a bit of eroticism in always beautiful, prominent lips. Ambiguity, multilayeredness and at the same time ... quite spectacular in reception. " G.L.

Our author graduated from Painting at the Institute of Fine Arts at the Art Department of the University of Zielona Góra. In 2009, she obtained a diploma in the studio of prof. Jan Gawron.
She has presented her works many times at exhibitions in Poland, as well as in Great Britain and Germany. For several years, her works have been sold in many Polish auction houses. Thus, her paintings went to many places in Poland and abroad, incl. to Spain and Germany.
He is a co-founder of the Artistic Group "INITIATYWA Twórcza 29 February". He practices painting, mosaic and sculpture.