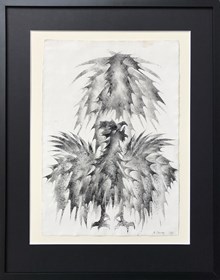 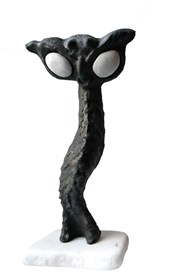 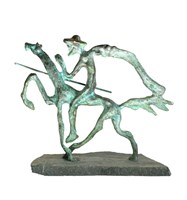 Bronisław Chromy (1925-2017) was a sculptor, draftsman, painter, professor at the Academy of Fine Arts in Krakow, member of the Polish Academy of Arts and Sciences, as well as a student of Xawery Dunikowski.

Artist was born in 1925 in Leńcze near Lanckorona. He first educated at an art school, and then at the Academy of Fine Arts in Krakow - he graduated in 1956.

Bronisław Chromy is a universal artist. His achievements include monumental monuments and large outdoor sculptures, as well as small statuettes and medals. The subjects of his work were very diverse: from historical and martyrdom, through musical, cosmological, and animistic themes. Among the most famous sculptures are the Krakow Wawel Dragon from the Vistula River, the "Fountain of musicians" from Plac Wolnica, "Owls" from the Plants, or "Sheep" from the square in front of the Agricultural Academy.

Animal themes can also be seen in Chromy's paintings. For many years he dealt with painting during his summer stays in Masuria, which usually ended with an exhibition at the Author's Gallery.

In the last years of his life, Professor Bronisław Chromy made his debut as a writer ("Kamień i marzenie"). In March 2009 he was awarded the Gold Medal for Merit to Culture - Gloria Artis.

From the sixties of the last century, Bronisław Chromy took part in many individual and collective exhibitions. He has also won numerous awards in competitions for monument designs.