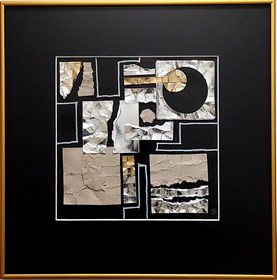 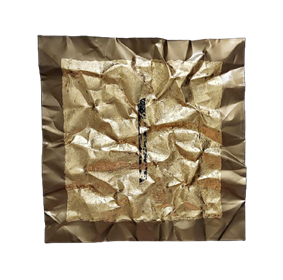 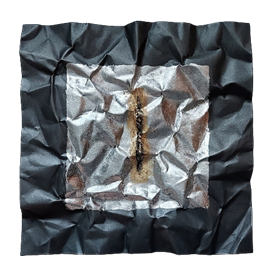 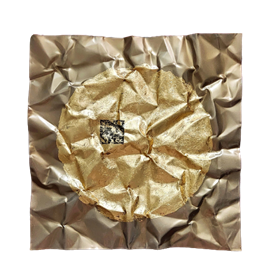 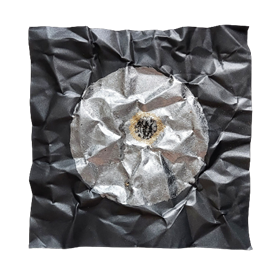 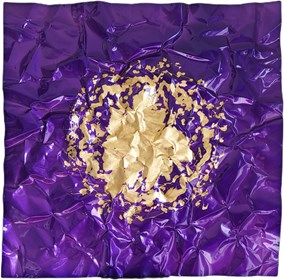 Joanna Daniło bends the smooth space of paper, metal and material to suit her own ideas and invariably gives her works the form of a square. The card is another interior design object, next to spatial pictures, screens, columns, chairs, vases and bowls. It was created from the need to reproduce the unstable state of the paper's crease in a material that would allow it to survive. The choice fell on light and plastic aluminum. So the usual crumpled and initially discarded piece of paper with important words got eternal life. The note is supposed to survive and remind what we want to remember, without writing words or sentences on it. It can be small and large, and each has its own...

The spectrum of Joanna Daniło's interests is very wide. She paid attention to the paper and knowing its impermanence she creates reflections of works in metal. A series of diptychs was created that illustrate the same thing in both matters. Only one material was guaranteed to survive. Folded screens, columns, and cards that are still intact are the metal ones. The paper had to be enclosed in glass cases, but this in large forms disturbed the contact with the environment.

So a series of small forms made of scraps of paper was created, inspired by the events: "Australia" - August 2019 fires in Australia, "Tomorrow I will go to the forest" - unlocking the possibility of going out during a pandemic, everyday life: "The Sun", "Italian Summer". The forms made of aluminum and paper closed in the form of a square are called "Note".

She also paints pictures, draws, creates small reliefs of paper, diptychs and triptychs. She likes to compare, juxtapose minimalism with almost baroque noise. She appreciates drawing and abstraction, which allows him to create new, unique worlds. “There is always a lot of room for imagination behind the line. Paper, brush and ink, a different brush and paint ... And can it be transferred - a line to three dimensions? I'm just trying to do this. All you need is cardboard, glue and a little or more patience… ”- she says about her drawings and notes made of paper.

In the "It Will Align" series, she creates spontaneous but well-thought-out sets of various objects that exist only for a moment, until they are photographed. Of course, they are limited by the shape of a square. Then they disappear neatly placed back into the drawers, on the shelves ... They remain in the photos.

She designed bags, wrote columns, fairy tales for children and adults, and conducted interviews with interesting figures of culture and art. A series of 17 theater-inspired handbags, each with its own short story, was also an expression of interference in space, both verbal and three-dimensional. It crumpled, sewed on, fluffed the material, gave new shapes, handles to hold. Then a series of laptop bags and minimalist bags was created, signed with the artist's name. She smuggled there non-standard solutions and shapes. Both the interior and exterior of the object were important.

She belongs to the Association of Polish Artists and Designers, Warsaw district.